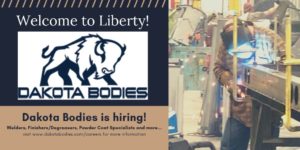 Liberty EDC Investors officially welcomed Dakota Bodies to Liberty at a luncheon on Tuesday, July 23rd. Joel Grode, Director of Operations at Dakota Bodies talked about Dakota Bodies history and plans for the Liberty facility, a tour of the facility followed. A special thanks to Ameren who sponsored this LEDC Investor Event!

Dakota Bodies a U.S. based privately held company opened a new manufacturing facility in the former 95,000 sq. ft. Holland 1916 Building in Liberty, Missouri. This expansion is due to the growth and high demand of quality engineered truck bodies. Dakota Bodies plans to hire 132 employees in the next 2 years and 4.1 Million in Capital investment over the next 5 years as they grow their operations. They are currently hiring welders, finishers/degreasers, powder coat specialists and more. Go to  www.dakotabodies.com/careers for more information about these open positions.

“This is a great investment in Liberty by Dakota Bodies that will create more than 100 life-changing jobs in the community,” Subash Alias, CEO of Missouri Partnership, said. “Missouri is a global leader in manufacturing, with leading-edge workforce training solutions and a statewide commitment to supporting the businesses that invest and create jobs here. It was an honor to work with Dakota Bodies, the State of Missouri and Liberty EDC on this attraction project.”

Dakota Bodies has been building quality utility and service truck bodies in Watertown, South Dakota since 1997. Over those years Dakota has grown into a 145,000 sq. ft. facility with over 250 employees, making them one of Watertown’s top employers. The history of quality and innovation has led them to be one of the nation’s top choices in the utility and service industries. As a growing manufacturer, Dakota Bodies continues to invest into their future with new technologies and techniques to better serve their customers and continue the climb up the industry ladder.