The Liberty Economic Development Corporation will be hosting a luncheon with Keynote Speaker Esther L. George, President and Chief Executive Officer of the Federal Reserve of Kansas City . 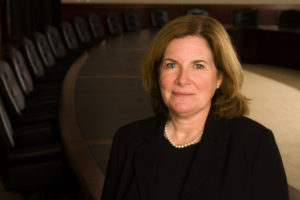 She has more than 30 years of experience in the Federal Reserve, with her early career primarily focused on regulatory oversight of banks and financial holding companies in seven states. She was directly involved in the banking supervision and discount window lending activities during the banking crisis of the 1980s and post-9/11. During the most recent financial crisis, she served as the acting director of the Federal Reserve Board’s Division of Banking Supervision and Regulation in Washington, D.C.

She has served as President of the Bank since October 2011, and currently leads the Federal Reserve’s efforts to modernize the US payments system. She hosts the Federal Reserve Bank of Kansas City’s international Economic Policy Symposium in Jackson Hole, Wyoming.

She is a native of Missouri.